During 2019, the National Cotton Council (NCC) worked closely with Congress to advance a disaster assistance package.

Letters to Chairman Designate of the House Agriculture Appropriations Subcommittee Sanford Bishop (D-GA) and Rep. Austin Scott (R-GA), a member of the House Agriculture Committee supported their amendment to House-approved legislation to provide relief and recovery assistance for farmers affected by wildfires, Hurricanes Florence and Michael, and other natural disasters in 2018. Their amendment ensured that a total of about $3 billion would be appropriated into USDA’s Wildfires and Hurricanes Indemnity Program (WHIP). Throughout the year, the NCC worked with USDA and Congress to include key improvements to WHIP and state block grants as part of the disaster assistance implementation.

The NCC, American Farm Bureau Federation and Farm Credit Council also coordinated a letter from 135 organizations to the President and Congressional leadership urging them to reach the consensus necessary to enact a disaster assistance bill. The groups noted that the livelihoods of farm families and the economic health of rural communities were at stake.

Bart Davis, a cotton and peanut producer from Doerun, Ga., testified on behalf of the NCC at a “State of the Farm Economy” hearing conducted by the House Agriculture Committee’s General Farm Commodities and Risk Management Subcommittee. His testimony, which focused on the hurricanes that ravaged the Southeast in 2018, emphasized that Congressional aid was crucial. 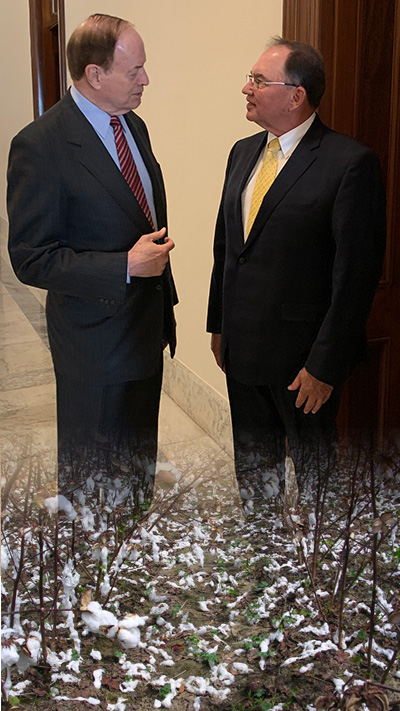 NCC Chairman Mike Tate visited with Congressional Members, including Sen. Richard Shelby (R-AL) regarding the need for Congress’ quick approval of a disaster package to mitigate losses damaged caused by Hurricanes Florence and Michael and other weather events.

When USDA announced the details of the Wildfires and Hurricane Indemnity Program Plus (WHIP+) for 2018 and 2019 crop losses due to hurricanes, wildfires, flooding, and other covered disaster events, the NCC posted on its website additional details and WHIP+ examples.

After Sen. John Thune (R-SD), along with Reps. Jason Smith (R-MO) and Sanford Bishop (D-GA), introduced the “Death Tax Repeal Act” (S. 215; H.R. 218) in their respective chambers, the NCC joined two coalitions on letters to those Congressional Members supporting this legislation aimed at permanently ending the estate tax.
Prior to the FY20 budget process, the NCC joined a large group of national farm and agribusiness organizations on letters to the House and Senate budget committees’ leadership and to Agriculture Secretary Sonny Perdue opposing cuts to crop insurance. Among points emphasized were that 1) from natural disasters to trade wars to government shutdowns – the public-private partnership that is crop insurance has been a consistent and reliable risk management tool and 2) the certainty of federal crop insurance offers lenders the assurances they need to continue to provide capital to America’s hard-working farmers and ranchers. The NCC also worked to make sure cotton’s priorities were maintained in USDA’s FY20 budget.

The NCC joined more than 20 other agricultural organizations on a letter to the Senate Agriculture, Nutrition & Forestry Committee leadership offering a strong endorsement of Dr. Heath P. Tarbert to be the next chairman of the Commodity Futures Trading Commission (CFTC). The letter noted Dr. Tarbert had 1) demonstrated his commitment to learning the issues and challenges facing the agriculture sector and 2) advocated on its behalf. 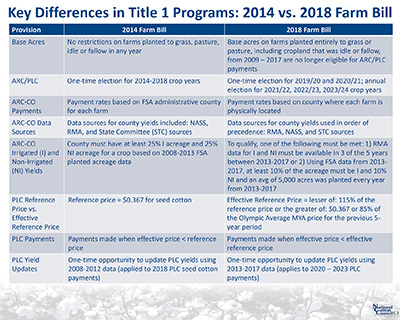 The NCC conducted educational webinars on 2018 farm law implementation for its members.

The NCC joined numerous other national and regional agricultural organizations on a letter requesting full funding for the Farm and Ranch Stress Assistance Network for FY20. Sent to the chairmen and ranking members of both the House and Senate Committees on Appropriations’ Subcommittees on Agriculture, Rural Development, Food and Drug Administration, and Related Agencies, the letter noted that the current prolonged farm economy downturn was causing even greater stress for farmers/ranchers and that net farm income in 2018 was nearly 50 percent less than in 2013.

After the House Appropriations Committee’s Subcommittee on Agriculture, Rural Development, Food and Drug Administration, and Related Agencies approved its FY20 spending bill for USDA, the Food & Drug Administration and other related agencies -- the NCC continued to monitor that appropriations process to ensure the industry’s priorities were maintained.

Included in that measure was $1.8 billion for farm programs, including $30 million to assist the implementation of the 2018 Farm Bill; $11.52 million for the Joint Cotton Pest Account to continue boll weevil eradication activities; and full funding for the three USDA Agricultural Research Service cotton ginning laboratories. The bill also ensured that both the Market Access Program and Foreign Market Development program were funded at farm bill provided levels. Congress later approved legislation that contained funds for these industry priorities.

Late in the year, the NCC joined numerous other agricultural, conservation, crop insurance and lender organizations on a letter to Agriculture Secretary Sonny Perdue and Office of Management and Budget Acting Director Russell Vought urging them not to propose cuts to crop insurance in the FY21 President’s budget.

The letter stated that, “The need for a strong crop insurance safety net was put to the test in 2019 when farmers across the Midwest and Mid-South experienced historic precipitation amounts during the planting season and then, during harvest, faced unprecedented and earlier than anticipated winter conditions.” The letter also noted that farm debt had increased 55 percent over the last decade.

The NCC expressed thanks to the House and Senate agriculture and appropriations committees’ leadership, including Cotton Belt Members, for urging USDA and the Administration to reopen all Farm Service Agency (FSA) offices. Later, the NCC conveyed its appreciation to USDA and the Administration for the reopening which restarted several farm program and other critical services for America's producers and other industry stakeholders.

NCC staff participated in a USDA listening session for stakeholders to provide comments on issues and priorities for implementation of 2018 farm law programs administered by the FSA, Risk Management Agency and Natural Resources Conservation Service. The NCC also filed comments with USDA regarding the U.S. cotton industry's priorities. Later, the NCC joined numerous other agricultural organizations on a letter to Agriculture Secretary Sonny Perdue regarding farm bill implementation and farmer decision aids. The groups requested the Secretary “quickly allocate funding to begin this important education effort in addition to timely implementation.”

NCC staff also participated in USDA's listening session for stakeholders to provide comments on issues and priorities for implementation of farm bill export promotion programs administered by the Foreign Agriculture Service. The NCC commented on the industry’s usage of the Market Access Program and Foreign Market Development program noting that the U.S. cotton industry has long utilized these important export promotion vehicles.

The NCC joined numerous other organizations on a letter to the House and Senate budget committees’ leadership urging them to reject calls for additional cuts to policies within the jurisdiction of the Senate Committee on Agriculture, Nutrition and Forestry or the House Committee on Agriculture. The letter conveyed the message that, “The 2018 Farm Bill improves upon reforms made in 2014 and is budget neutral, with the measure projected to spend far less over 10 years compared to the 2014 Farm Bill. The bill does so while also improving access to conservation programs, maintaining a commitment to nutrition programs, investing in research, and providing farmers and ranchers with the risk management certainty needed in this uncertain environment.”

In other activity, the NCC:

•    joined other interest organizations in working with Congress and the Administration to find a solution to restart the operation of the marketing loan program during the government shutdown early in 2019.
•    responded to Rep. Mike Conaway’s (R-TX) announcement that he was not seeking re-election by distributing a statement noting that the Congressman – who chaired the House Agriculture Committee from 2015-18 – wholeheartedly served U.S. agriculture, including demonstrating superb leadership through the development and passage of the 2018 farm bill.
•    conducted its planting intentions survey for the 2020 season by distributing a questionnaire to upland and extra-long staple cotton producers across the Cotton Belt.