The NCC joined more than 250 organizations representing agriculture and other key sectors on a letter to the House and Senate budget and appropriations committees' chairmen/ranking members urging rejection of calls for additional cuts to programs within the jurisdiction of the Senate and House agriculture committees. The letter noted the groups’ opposition to additional cuts for the agriculture committees in the FY17 appropriations process as well as proposals to re-open any farm bill title during consideration of the 2017 Budget Resolution.

The NCC submitted specific FY17 agriculture appropriations requests to both the House and Senate agriculture appropriations subcommittees. That included full funding of $11.52 million for the Joint Cotton Pests account which funds the Boll Weevil Eradication and the Pink Bollworm Eradication programs; that the Market Access Program (MAP) and the Foreign Market Development (FMD) program continue at the funding levels set in the 2014 farm law; that adequate funding be maintained for the Farm Service Agency and the Risk Management Agency and for several specific programs within USDA’s Agricultural Research Service. The NCC sought a specific increase of $1.68 million in total funding for the three ginning research units. In addition, the NCC asked that funding be maintained for the research units managing cotton programs conducted at the Southern Regional Research Center in New Orleans, and the various cotton breeding and entomology programs, including support for the Cotton Germplasm Collection managed by the Southern Plains Crop Germplasm Unit housed at the Southern Plains Agricultural Research Center in College Station, Texas.

Simultaneously, the NCC joined farm, conservation, crop insurance and lending groups on a letter to the chairmen and ranking members of the House and Senate appropriations committees reiterating the importance of crop insurance. Later, the NCC joined with more than 100 other organizations on a letter to the House Appropriations Committee in support of full funding for both the MAP and FMD programs, which provide critical funding for Cotton Council International export market development activities. The House Appropriations Committee approved its version of the FY17 Agriculture Appropriations bill which included the NCC-requested level for the Cotton Pests Account and which fully funded both the MAP and the FMD program. The Senate Appropriations Committee approved its version of the FY17 Agriculture Appropriations bill, and it also contained the NCC’s priorities. That Senate committee’s report accompanying its appropriations bill also included directive language on several cotton and related provisions, among them encouraging the Secretary of Agriculture to continue to work with Congress and the industry to find a path forward on providing an adequate safety net for cottonseed. The bill itself contained language urging the Food & Drug Administration (FDA) to address industry concerns with the FDA’s Food Safety Modernization Act Preventive Controls for Animal Food Rule. 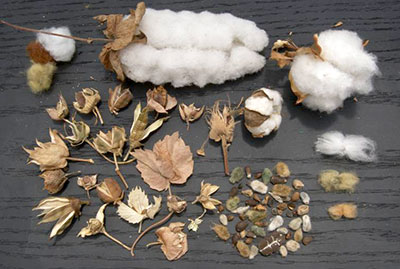 The NCC joined a group of business organizations on a letter to Senate Majority Leader Mitch McConnell (R-KY) supporting a Senate vote on the House-passed Death Tax Repeal Act of 2015 (H.R. 1105). The letter emphasized that a permanent repeal of the estate tax was the only solution for family businesses and farms and repealing the estate tax would help family businesses create jobs, expand operations and grow the economy.

The Family Business Coalition, of which the NCC is a member, sent a letter signed by 119 organizations to Treasury Secretary Jack Lew opposing Treasury’s proposed changes regarding Section 2704 on estate and gift tax valuation discounts. The letter noted the changes would significantly alter family businesses’ succession plans and make it more difficult for family owned businesses to transition to the next generation. The NCC reiterated its concerns later in comments filed on the draft IRS regulation change for Section 2704.

The NCC sent Representative Ralph Abraham (R-LA) a letter supporting the Fairness for Agricultural Machinery and Equipment Act (H.R. 4474), which he introduced early in 2016 and that was reported to the House Ways and Means Committee. This bill would make permanent a provision in the tax code to shorten the Modified Accelerated Cost Recovery System depreciation schedule for farm equipment from seven to five years. The letter noted that, “Agricultural equipment is depreciated over a seven-year schedule while equipment used in other sectors which has similar use patterns and life spans, benefits from a five-year schedule.”

The NCC and 23 other organizations sent a letter to the Senate Agriculture, Nutrition & Forestry Committee in support of the "Commodity End User Relief Act." That Committee later approved the measure which reauthorized the Commodity Futures Trading Commission (CFTC). Later, the NCC, the American Cotton Shippers Association and AMCOT filed a joint comment letter with the CFTC in response to its supplemental notice of proposed rulemaking on position limits. The letter generally supported the comments filed previously by the Commodity Markets Council, which provided practical recommendations for an effective and efficient position limits regime that is workable for commercial end-users. Cotton industry members also had commented to the CFTC on the position limits issue in 2014 and 2015.

The NCC closely monitored the House Armed Services Committee’s consideration of its version of the annual defense authorization bill as it moved to the full House for consideration. The Committee draft included a provision that would have increased the acquisition threshold from $100,000 (inflation adjusted to $150,000) currently to $500,000 for Department of Defense (DOD) and Department of Homeland Security (DHS) purchases subject to the Berry Amendment—which stipulates that DOD and DHS purchases of textiles, clothing, food and other critical components must be 100 percent U.S. content and produced in the United States. In response to the inclusion of this provision again, the NCC, National Council of Textile Organizations (NCTO) and 10 other groups sent a letter to all Committee members in support of an amendment sponsored by Representative Walter Jones (R-NC) to restore the original threshold for the Berry Amendment. The Committee agreed to accept the Jones amendment as part of the bill that was reported out of Committee. The NCC also monitored a similar Senate bill – to ensure the Berry Amendment was not weakened. Prior to Senate consideration of the FY17 National Defense Authorization Act the NCC, NCTO and 13 other organizations sent a letter to the Senate supporting the inclusion of Senator Lindsey Graham’s (R-SC) amendment that was aimed at preventing any weakening. Late in the year, Congress approved the FY17 National Defense Authorization Act which included continuation of the Berry Amendment and provisions favorable to the U.S. textile industry.

The NCC worked with Congress and the Department of Labor (DOL) to determine how the agency’s new overtime rule would affect the agricultural community. That included monitoring the progress of the Regulatory Relief for Small Businesses, Schools and Nonprofits Act (S. 3462) introduced by Senator James Lankford (R-OK) that called for delaying the overtime rule by six months. That bill was a companion to H.R. 6094, introduced by Representative Tim Walberg (R-MI), which also would delay the rule by six months. The NCC, along with more than 200 other national, state and local organizations across various industries, cosigned a letter to Senator Lamar Alexander (R-TN), chairman of the Senate Committee on Health, Education, Labor and Pensions, thanking him for introducing the Overtime Reform and Review Act (S. 3464) that would provide significant relief from the DOL final overtime rule’s negative impacts. Late in the year, a federal judge in Texas granted a preliminary injunction to delay implementation of the new overtime rule. That injunction stemmed from a lawsuit filed by 21 states and multiple trade associations. The NCC continued to work with other organizations to address concerns with the new rule.

In other legislative activity, the NCC:

Early in the year, after Agriculture Secretary Thomas Vilsack commented that USDA believed its legal interpretation of the farm bill did not provide the authority to make the designation of cottonseed as an “other oilseed”, the NCC issued a statement conveying its extreme disappointment. The statement emphasized that the NCC believed, like a broad group of Congressional Members, that USDA clearly had this authority as described in the current farm bill – and that the industry remained committed to pursuing a cottonseed designation and policy to help provide the U.S. cotton industry with long-term stability.

The NCC continued its outreach to Cotton Belt Members and to USDA regarding the urgency for policymakers to take action and to find ways to help address the significant economic challenges facing the industry. After Congress' late-year Continuing Resolution bill did not include the NCC’s cottonseed proposal, NCC staff and Congressional staff began work on any modifications needed to the proposal so it would be ready for consideration at the first legislative opportunity in 2017. The NCC also continued outreach with other interested stakeholders to discuss the proposal’s details and address any remaining concerns and questions.

NCC staff and Congressional staff worked on any necessary modifications to NCC’s cottonseed proposal so it would be ready for consideration at the first legislative opportunity in 2017.

Later, during a House Committee on Agriculture hearing regarding the state of the rural economy, several Committee members commented on the seriousness of the economic situation facing U.S. cotton producers and the broader cotton industry. A number of questions were raised with the Secretary about the industry's request for cottonseed to be designated as an "other oilseed" for farm bill purposes and why the Secretary had not been willing to make the designation.

The NCC also commended Secretary Vilsack for his efforts on making possible the Cotton Ginning Cost-Share (CGCS) program. Announced mid-year by USDA, the CGCS provided about $330 million in one-time cost-share assistance payments to offset a portion of a cotton producer’s 2015 crop season ginning costs. NCC Chairman Shane Stephens noted that the CGCS program would provide direct marketing assistance to producers and help stabilize the U.S. cotton industry. To assist its members, the NCC posted a CGCS fact sheet, including payment calculation information, on its website.

Secretary Vilsack announced a one-time, 30-day extension of the June 1, 2016 status date for determining USDA program eligibility. Earlier, the NCC had joined with 69 national, regional, and state commodity and farm organizations on a letter to the Secretary asking for an extension to the end of 2016 for farms to have time to understand how the new “actively engaged in farming” regulations would affect them and what changes might be needed to their farm operating plan to remain in compliance.

Late in the year, the Risk Management Agency (RMA) announced updated factors for prevented planting coverage for seven crops, including cotton. The factors were based on recommendations of a 2013 USDA Office of Inspector General study. The NCC subsequently submitted comments to RMA that noted serious concern with that study’s methodology and that reiterated no change was warranted for cotton’s prevented planting factor.

On other farm policy-related matters, the NCC: