The National Cotton Council (NCC) conveyed the industry’s positions and concerns to Congressional Members and key government agency officials regarding critical legislative, trade, regulatory and environmental matters. For example, the NCC distributed releases in which it conveyed its appreciation to the Trump Administration for 1) instituting a second round of trade mitigation payments and 2) for the outcome of negotiations with Mexico and Canada to remove the U.S. Section 232 tariffs and corresponding retaliatory tariffs.

The NCC utilized social media across Twitter, Facebook, YouTube, podcasts via YouTube and Instagram. The posts highlighted news and information from the NCC, Cotton Council International and the U.S. cotton industry. The overall goal is informing, educating and creating positive perceptions regarding the NCC and the industry among the NCC's primary audiences of its members, Congress/Congressional staffers and consumers.

The NCC continued as an in-kind supporter of America’s Heartland, the award-winning national television series celebrating American agriculture. The long-running series, aired on public television and the RFD-TV cable and satellite channel, educates consumers about the origins of their food, fiber and fuel.

The NCC continued to participate in Farm Policy Facts (FPF) (http://www.farmpolicyfacts.org/). The FPF and “The Hand That Feeds Us” initiatives are committed to ensuring American agriculture’s long-term success by facilitating meaningful conversations with legislators and consumers about how food and fiber is produced. 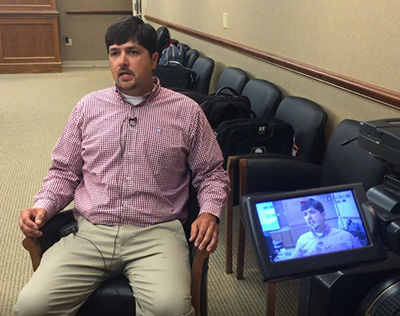 Mock media interviews were part of the communications training the NCC provided for Ben Good, a Starkville, Miss., cotton producer, and other 2019 Emerging Leaders Program participants.

The NCC utilized key communications vehicles such as its Cotton’s Week newsletter, radio news lines, columns, videos and webinars in various trade publications for disseminating key information to its members. Regarding farm law implementation, for example, the NCC’s educational webinars were highly publicized and information such as YouTube videos of the presentations were made and posted on the NCC’s website www.cotton.org. That site continued to be a significant tool for the timely sharing of important information to NCC members and other interested groups, including feeds from the NCC social media channels.

Weekly RFD-TV segments highlighting important industry issues continued to be produced. Video offerings included monthly segments for Cotton International’s web podcast series on various economic topics as well as various Ag Day segments on key news topics. The NCC updated its “Prevention of Plastic Contamination” video with such timely tips as 1) what to do with round module wrap rolls once they are empty and 2) synchronizing module truck bed-chain speed with the ground when picking up modules.

In other communications activity, the NCC:
•    made a significant portion of its website information accessible only to its members, who were encouraged to obtain a website login password if not already having one; and
•    contracted with BoardBookit to facilitate the electronic distribution of meeting schedules, reference materials, hotel maps and other information to attendees at the NCC’s annual meeting, other 2019 NCC meetings and those planned for 2020. 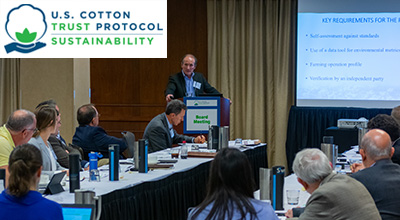 U.S. Cotton Trust Protocol directors and advisers discuss the program’s 2020 launch during a meeting in Memphis.

A major initiative aimed at affecting public attitudes was the NCC’s 2019 launch of the U.S. Cotton Trust Protocol pilot. The Trust Protocol is a program designed to confirm and increase awareness of the fact that U.S. cotton producers are farming responsibly and striving for continuous improvement.

The Trust Protocol’s mission is to be the world leader for sustainable cotton production. The Protocol has a vision to meet U.S. cotton’s customers’ sustainability goals by validating that U.S. cotton is the most responsibly-produced cotton in the world while striving for continuous improvement to reduce its environmental footprint.

This U.S. cotton industry farm-level sustainability initiative is governed by a multi-stakeholder board that was appointed late in the year in preparation for full Protocol implementation in the spring of 2020. The Seam is the Protocol’s IT partner. The Trust Protocol worked with groups, organizations and firms such as gins, merchants, and marketing cooperatives which assisted in recruiting producer participants and in verification of information obtained through the Protocol. Recruitment materials were created along with significant development of the Protocol’s website, www.TrustUSCotton.org.